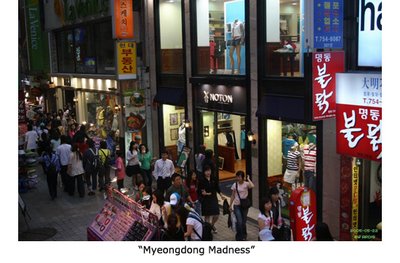 It's around midnight and I just got back from Seoul, South Korea. I went with a fellow Canuck: Camille, who lives in Gunsan. She travelled almost 4 hours each way, just for a day in the city! Big thanks out to her!

Seoul's interactive Subway map is amazing. Google it. Type in your departure and arrival locations to get the quickest route. But if it's your first time using the metro system, give yourself ample time. Both Camille and I arrived an hour later than estimated.

Camille wanted to buy her family "authentic" Korean gifts, so we met at Yong-gak: a traditional shopping area. If you want paper lamps, decorative chopsticks, little satin bags and gaudy jewelry, that's the place to go! We visited an Andy Warhol themed mall and looked on as Koreans danced in traditional costume. There was also Buddhist-inspired architecture to admire.

Seeing a face from home must have whetted our appetites for "America" because we're guilty of eating McDonalds AND T.G.I.F. Fridays! We were on our feet all day and starved. I've developed a taste for Korean cuisine, but Camille doesn't like spicy food so the picking's limited!

We only saw two areas: Yong-Gak and Myeong-Dong. Myeong-Dong is a hot spot. The streets were absolutely packed with people. It was dark by the time we got there. The tower was in clear view & there were stores everywhere like American apparel, Calvin Klein and The Body shop!

The highlight of the day, in my opinion, was getting interviewed and filmed. As Camille and I were videotaped, people on the street took our photos! We were asked: "What is the relationship like between parent and child in Canada? Could you see yourself living in Korea long-term? What are cultural differences you find shocking? What constitutes 'friendship' in Canada?" and, "do you think you could develop a close friendship with a Korean?" It was so much fun! I hogged the limelight but Camille stole it back when they asked if we stay in touch with our siblings now that we're living in Korea.

One strange thing we saw on the street were people holding 'FREE HUGS' signs! The first guy was dorky so we surmised he was only lonely but the next girl shook that hypothesis! ... We want to know: Who is their employer??

... Those of you awaiting photos, keep on waiting. I'm paid on the 15th for the preceding month and I didn't even arrive in Korea until October 27th! No Canon for me... yet.

Posted by Eva Karrin McKinnon at 9:20 AM

I actually saw a group of "Free Huggers" in New York and surprisingly a lot of people went to get hugged. New Yorkers are a friendly bunch.

But were they dolling out hugs for fun? No employer? Just a crazy notion?

yup apparently its a worldwide craze that started in sydney austrialia, you can look it up on youtube