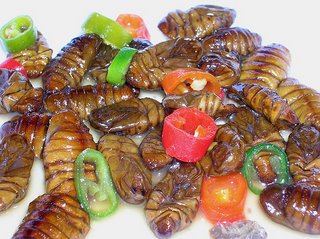 Silkworm pupa we were served at the bar
See: "PLAY"
WORK

What's it like to teach in a Korean English Second Language (ESL) school?

First of all, consider the competitiveness of the Korean educational system. Kids attend school Monday-Saturday from approximately 6AM-11PM. They get a dinner break between school and E.S.L. training, but that's it. Students sleep, on average, 5 hours a night. I try to go easy on them. The younger ones have a natural urge to play, so I make sure to fit a game into every class. Children are children!

At the bar tonight, Chung Lim Jang was telling me about his experiences at school. To this day, it's acceptable for teachers to beat thier students. Teenage boys who fall asleep in class are forced to do pushups on their fists as a teacher slams their backside with a baseball bat. Female students are struck with a ruler.

Illness isn't recognized. Children can be choking on a horse and are expected to attend school, weary and contagious. My student, Jean, was shocked when I suggested she go home during class. I felt awful. It was 9:30 at night, she was obviously sick with the flu and should have been in bed.

The students' togetherness creates a strong sense of community, especially since most eat dinner with friends, not family. Girls are friends with girls and boys are friends with boys. It's the confusionist influence. When I tell my classes that I have male friends, they can't quite wrap their minds around the concept. Korea is such a male dominant culture and sexuality is taboo. The kids can't imagine being friends with someone of the opposite sex. To them, it's dangerous territory. And no, it isn't just their age. I'm Chung Lim Jang's only female friend!

By the time students end elementary school, they're streamed: University bound and delinquent. Even my youngest students (around the age of 8) can list the Korean Universities in order of academic hierarchy. Every parent wants their kid to make it to the University of Seoul.

The ESL classes are grouped in 3 month terms. I took over at the end of the my classes' second month: October, so I have to say goodbye to my current classes and hello to new ones at the end of next week. Today I submitted my first batch of REPORT CARDS. If you hate paperwork, a hogwon is the perfect place to teach! The total sum of my paperwork includes daily lesson plans, small notes about the children's progress, and final report cards- only a letter grade for each student.

All of the teachers arrive at the school one hour before classes start. We're paid for the preperation time. The job can be stress-free if you secure a teaching position at a stable hogwon. Hogwons are businesses and many close within a few months of opening. I made sure my school had been around for a solid 8 years.

Chung Lim and I went out again. Every conversation I have with the guy deserves taping! I've always wanted one of those miniature tape recorders. The night was fascinating. As we drank our beers, the bartender, who guessed I was from Russia, handed us a steaming stone bowl of worms. I couldn't help but figure she did it to shock me. MMMM, nothing to settle the stomach like a rancid bowl of slimy brown things. As soon as one touched my tongue, I reached for a napkin.

I wanted to be brave! I just needed the SURVIVOR audience: a few million viewers and blazing camera lights. It was wholly my choice and I feared the taste of my dinner, so I opted out. Wah. Baby. Yeah yeah.

Chung Lim told me about "Rice Brother": a former member of the Korean mafia who makes violent movies, available online. He also has something to do with the Korean Internet gaming industry, if I have my story straight. I'm going to look into him tomorrow.

Anyway, I guess Rice Brother was a celebrity in 2004, but his fame has since faded. In one of his movies, he flashes his phone number. This past weekend, Chung Lim cold-called him! They made a dinner date in Seoul, Sunday. I only understood about 30% of what Chung Lim was expressing, but I think he was trying to tell me that Rice Brother has a good heart underneath it all, and is loyal in character.

I got answers to a few questions like, "why do so many people wear masks, on the street?" Chung said it's to refrain from spreading viruses like colds, but mainly to avoid exposure to the pollution. In Seoul, where the pollution is a big problem, you see masks everywhere.

I miss you, clean Canadian air!

Posted by Eva Karrin McKinnon at 7:23 AM